Nominate your boss or co-worker for one of the JAILCON20 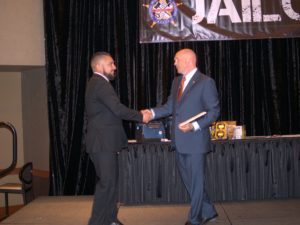 Awards will be presented November 11, 2020,at the JAILCON20 Awards Ceremony in conjunction with JAILCON20 Western Regional Conference at the Talking Stick Resort in Scottsdale, AZ.  Complimentary full conference registration will be provided by NIJO for the individual award recipients and for two agency representatives of the agency receiving the “Detention Facility Award”.  In addition, NIJO will provide lunch for one spouse/guest attending the awards luncheon for each award representative. NOTE: Attendees and award recipients are responsible for arranging and paying for their own transportation and lodging for the conference.

All nominations should be submitted directly to NIJO Awards Committee by emailing to jhammer@jailtraining.org or mailed to:

NIJO – JAILCON20 Awards Committee
PO Box 1115 Midway, UT  84049
If you have any questions concerning this application, please contact NIJO at 801.810.5245 or by contacting NIJO.
DOWNLOAD APPLICATION